Okay.. so according to the blog’s title, I will be featuring some of the things that I bake. Don’t get your hopes up people, it is not at all like the amazingly pretty & delicious foodie blogs that I have linked on the right side of the page. This is the story of a girl who up until recently is extremely adamant about having anything to do with baking (it just seems so feminine, don’t you think?). but anyway, the little things are just so darn cute, and well I AM a girl so what the hell… hee hee 😀

so this far, I have been on several baking frenzies (7 to date), periods in which I just put everything on hold and dedicate my entire day to baking. some are pretty okay, and some are… well… mmmm… let’s just say that I wouldn’t recommend it… hee hee… so here is some snapshots of my journey so far (cupcake-wise) :

This is my very first baking attempt, based on a basic cupcake recipe that I downloaded from Nigella Lawson’s website (check out http://www.nigella.com for the vanilla cupcake recipe). As this was my 1st attempt, it got so ugly that I covered it up with some homemade royal icing and just made it even uglier hyaaahahahahahahaha… to make matters worse (?) I tried to make the chocolate version, using the same recipe but substituting 1/4 of the flour with cocoa powder, and 1/4 of the butter with melted cooking chocolate. It actually turned out quite OK (am so proud!), with a chocolatey taste and halfway brownie texture.

This was from my second attempt, in which I used the nigella recipe but using a mixing technique that I caught in what I summed up to be the best cupcake blog ever (of all the blogs that I’ve been lurking in) : cupcake bakeshop by chockylit (linked at the right hand side of my page). In my 2nd baking frenzy I divided the batter by 4, and added to 3 of them a twist; mint essence, orange rind + juice, and frambozen paste. The mint was phenomenal, I used a little bit too much essence and gave it a real kick. I think it’d be great for a pick-me-up at breakfast. The orange, I used too little rind and juice so there was barely any taste of orange in the cake. For the frambozen, it tasted too artificial (I did use a cheap brand) so I’m definitely not making that one ever again. All in all, the cake was a little bit more successful than the 1st batch. The texture was softer and tasted better.

This was my 3rd attempt. I used roombutter which was supposed to make cakes softer. It did. But my cakes sank into infinity and beyond, and was too oily for my taste. But once it cooled down, it was really really fluffy! It was heavenly fluffy (but the taste was too butter-y). I also made a cinnamon version of the cupcake, which was a success. Have to remind myself to make that one again with my usual brand of butter. 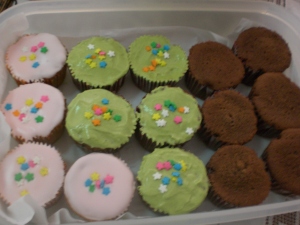 This (attempt No 4) was made for a halalbihalal event with some of my friends. It was the vanilla cupcakes which I frosted with frambosen flavored royal icing, and chocolate cupcake with green tea icing. The green tea icing was almost delicious (I think I’ll have to put in some more green tea next time)…. and I’m also planning to make green tea cupcakes some day (I’m going to try a recipe from cupcake bakeshop by chockylit)

This was attempt No 5, made for halalbihalal with my family. I made 100 mini vanilla cupcakes, frosted with orange/strawberry royal icing/chocolate ganache or something. I totally forgot to take pictures of the chocolate iced ones. They were gone before I got a chance! (double proud!). Everybody took home the leftover cakes, and these were the only ones I managed to salvage 😀 The chocolate ganache/whatever was actually a failed recipe, saved by my ever so expert father to become something edible. Plan on experimenting with it again someday… 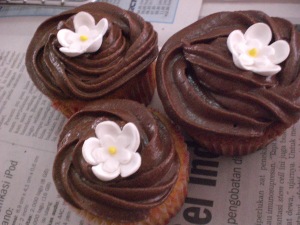 The above was attempt No 6 made from vanilla cupcakes (based on the Magnolia Bakery Cookbook recipe I got from http://cupcakeblog.com/index.php/200/01. The frosting was something I got from allrecipes.com (forgot the exact link, sorry) and turned out great. Everything else on top was tit and tats that I bought at a baking supplies store. The occasion was for a friend’s daughter’s birthday party so I had to keep it festive. Haven’t got any feedback though… 😦 I just hope it didn’t taste THAT bad… 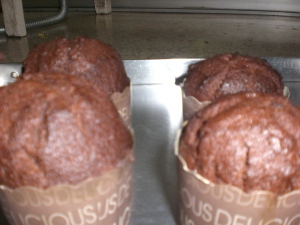 This was my latest try, and it was made from an instant muffin mix that my brother bought for me. To me, creating these big bubbas wasn’t as fulfilling as my previous 6 attempts was, because it was too instant. I didn’t like the end result cos it was too crunchy (can you imagine a crunchy cake?) and not chocolatey enough… My dad liked it though, better than my usual creations… whoa… big blow to the tummy for me.

So that’s my baking journey so far… I’ve been trying to gear myself up for the next projects… wish me luck!

3 thoughts on “baking in progress”